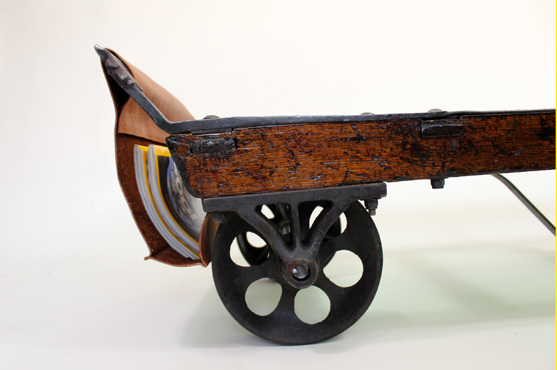 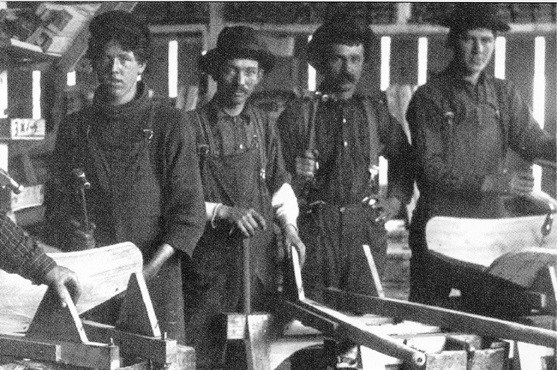 This former Lansing Wheelbarrow Co, hand truck is made of Elm wood and steel and has a leather pocket to hold magazines. It has been re-purposed to begin a new life as a coffee table. It has been fitted with green tinted, safety tempered 0.25" glass with beveled edges. The glass has been adhered firmly to the structure using stainless stain adapters and a specialized invisible UV glue which allows for flush fitting to the bottom of the glass. This leaves the top surface of the table clean and uninterrupted with no protruding fixings.

The Lansing Wheelbarrow Co., was founded in 1881 by Arthur Courtland Stebbins and Edward Sparrow and was situated in Lansing, Michigan, close to the Grand River.  Manufacturing material(the elm logs) was floated down stream, supply the manufacturing factory.   It took days for a blacksmith to turn out a wheelbarrow, but by 1890, the Lansing company was turning out 10,000 wheelbarrows a year. 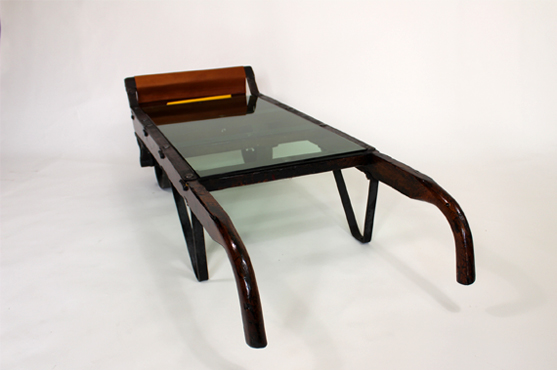 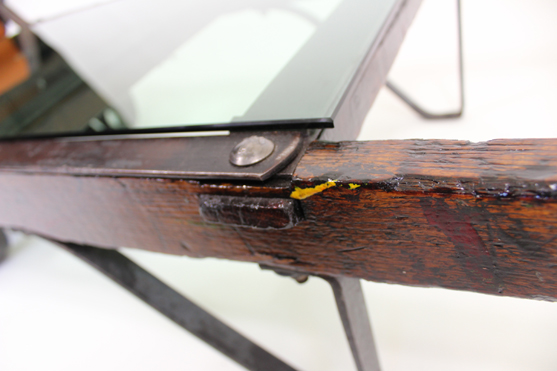 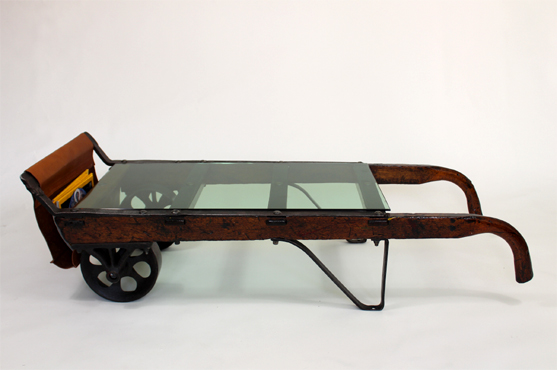 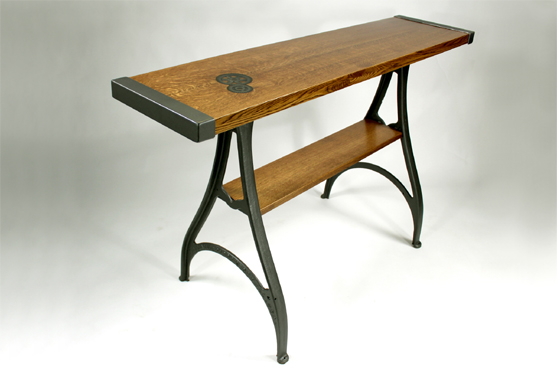 The table top and shelf are made from quarter sawn white oak wood with a stain and polyurethane finish, complete with two painted mild steel end caps.

There are two original lathe gears epoxy flush fitted into the top face of the table. 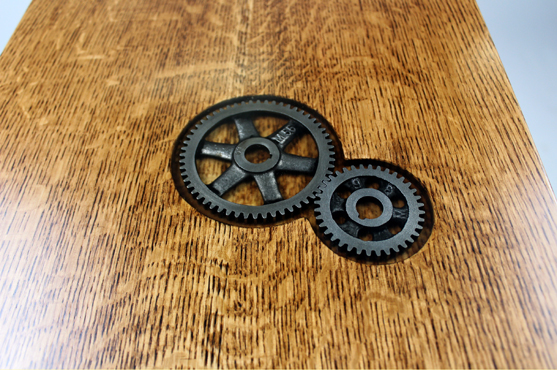 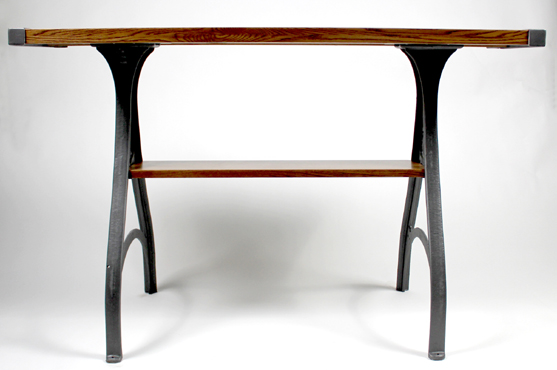 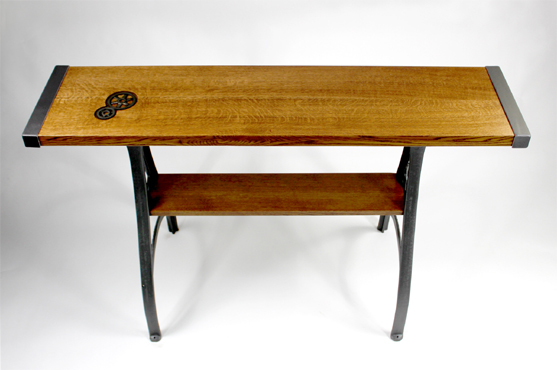 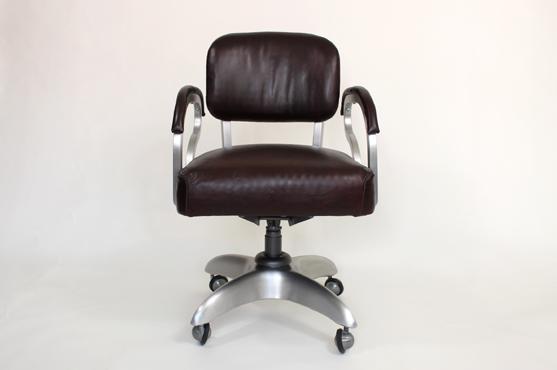 This classic Art Deco chair from the General Fireproofing Company, has been fully and meticulously restored from tip to toe. The original, worn casters have been replaced with quality Shepherd classic, soft tread ball casters,  which are suitable for hardwood floors.  All the aluminium parts have been refinished and clear coated.  The chair has been reupholstered using the best quality and natural materials.  Natural Dunlop latex foam, natural wool batting, 100% hemp canvas lining and finally recovered using genuine  Mexican Palencia cow hide. This leather has been finished with a rich matte finish, that have a slight "pull-up finish" which adds a touch of elegance.

The General Fireproofing Company (GF) was founded in 1902 in Youngstown, Ohio as a manufacturer of building materials. During the panic of 1907, when all building practically ceased, the company decided to emphasize their line steel office furniture. GF’s first 4-drawer steel vertical file was built in 1910, and their first fireproof safe was introduced in 1912.

The world’s first all-aluminum office chair was designed by the ALCOA company in 1924. In 1929 GF began manufacturing their own aluminum chairs, the first of which were shipped in 1930. These first chairs were copies of the wood office chairs popular at the time, and were even painted with wood-grain finishes.

The “Goodform” seating line began in August 1932 with the introduction of the Model #2123. Ten more models were introduced in 1935

During World War II, GF ceased production of all its regular products in order to manufacture aircraft parts. After VJ Day, almost the entire plant had to be converted back to the manufacture of furniture, and by 1946 the company was producing the same volume they were in 1938. In 1948, GF introduced the Mode-Maker line of executive office desks, designed in collaboration with Raymond Loewy.

Many of GF’s furniture lines were discontinued in the 1970’s, and the original company went bankrupt in 1989 and was bought by TANG Industries of Gallatin, Tennessee. 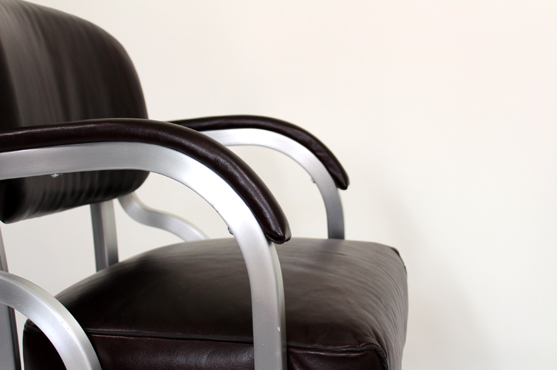 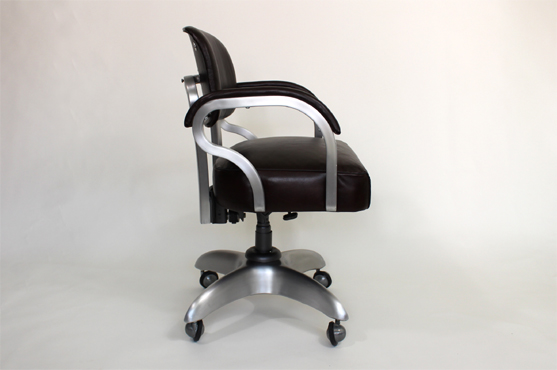 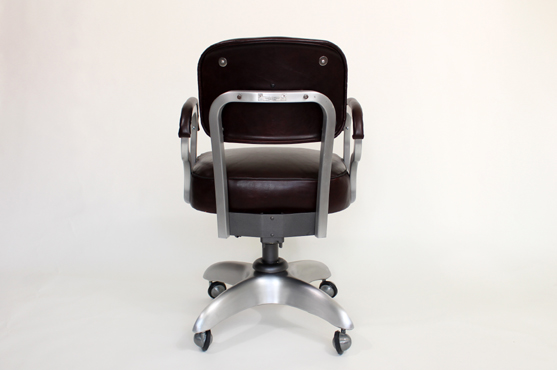